I'm still working on the revision suggestions I learned in Darcy Pattison's Revision Retreat Weekend last month. I've spent the past several days making sure my manuscript has plenty of sensory details to bring the story to life. My goal is to engage at least three senses in every chapter. I've been going through my manuscript chapter by chapter and recording which senses I've included on the spreadsheet that I talked about in my previous post (another great use for spreadsheet plotting!)

I've learned a lot by doing this. I was pleasantly surprised by how many sensory details I've already included. However, these details were mostly visual and auditory. I really need to pay more attention to taste, smell, and feel. By including three senses in each chapter, I've had to stretch out of my norm and look for these extra details I don't normally think about. It's been a great exercise that I think will benefit all my future writing, hopefully making me pay more attention to these details up front, rather than waiting for the revision stage.

How about you? Does using sensory details come naturally to you, or is it something you have to pay special attention to? Which senses are you most likely to include?
Posted by Susan Fields 30 comments:

As I've said before, I am a diehard outliner. It's not that I like outlining, because usually by the time I'm that close to starting a story, I wish I could just forget the outline and start writing already. But I outline anyway, because I'm a compulsive organizer, and I I know that if I tried to wing it I'd get myself so lost on some tangent I'd never find my way back.

But even for all my outlining, there is one organizational tool I've never tried until now: spreadsheet plotting. We learned about this in Darcy Pattison's Novel Metamorphosis workbook that we used during the revision retreat weekend, and yesterday I applied it to my novel and made a spreadsheet to keep track of who, where, when, and what happens in each chapter. What an great way to see at a glance how often I use different settings, which chapters certain characters appear in, how many pages each chapter has, and so much more - whatever you want to keep track of.

I've been working on revising a subplot involving my main character's best friend. With the spreadsheet, I can quickly see which chapters the best friend appears in, so I know which chapters will need major changes. And, as Darcy pointed out, the spreadsheet program allows you to sort columns, making it even easier to see how often a setting appears, a certain POV character is used, etc.

Have you tried spreadsheet plotting? Are there any areas in particular you like to keep track of with a spreadsheet, or that you think a spreadsheet would be helpful for? 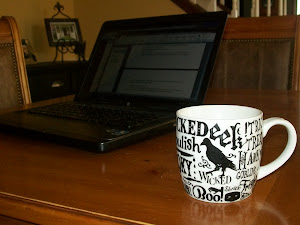